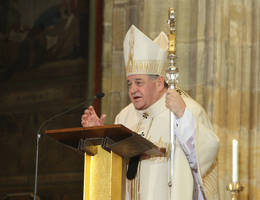 Dear friends gathered here, representatives of the political, cultural and social spheres, dear brother bishops, priests and deacons, women and men religious, sisters and brothers in Christ here in the cathedral as well as present through the television and radio,

The reading from the Acts of the Apostles has reminded us of the historic decision of Apostle Paul who set the strategy for implementing the commission of Jesus to proclaim the gospel to all nations. Thus he fulfilled the words of Prophet Isaiah as well as those of old Simeon whose hymn in the temple of Jerusalem became a part of the Liturgy of the Hours in the Church.

This strategy obliges her to evangelization that became the basis of the new civilization of love growing up from the truth. It is here that we can see the journey of Saint Adalbert as well as the journey of Cardinal Josef Beran. The defense of human liberty and fight against slavery together with the constant effort in promotion of the loving family life as well as of the true life of priests. This was the missionary program of both our great expatriates. They both are in service of the Good Shepherd, as Jesus Christ called himself in the beautiful allegory of the Gospel of Saint John: “A good shepherd lays down his life for the sheep.” In the Easter time and after the Easter Triduum we know well what the single commandment of love means; the commandment that grows from the true humanity of the positive Golden Rule of Jesus: “Do to others whatever you would have them do to you. This is the law and the prophets” (Mt 7:12). This law in its negative rendering “whatever you would not…” was known as early as in Antiquity, as testified by Tobias and even Confucius.

Let me address the arriving expatriates as an unworthy successor on the see of Saint Adalbert: “Welcome, Father Archbishop Josef, Primate of Bohemia, Archbishop of Prague, Cardinal of the Holy Roman Church. You who did not remain silent in the decisive moment, because you could not remain silent. You come back from the exile, again in the decisive hour, and you again go with the relic of Saint Adalbert, who first and foremost of our patron saints could help most powerfully in that decisive hour, because the figure of Saint Wenceslas had been blemished by the Nazi abuse.”

The decisive hour concerns, again and again, the most fundamental issues of being and not being of the national communion, the people of this country. Saint Bishop Adalbert as well as Cardinal Josef Beran dealt with the same things as we do. The danger grows in proportion to the possibility of promoting the evil and making a moral collapse. What are the problems? And where to set a guard? How and where to protect what we fight for? For many centuries we have known that it is about man, about our humanity. Let us call what is at stake in the times of Saint Adalbert, after the World War II as well as today. It surely is only a coincidence that at the very moment when we welcome here Cardinal Beran, the President of the Czech Republic is being a guest of the congress of the Communist Party, who – despite of being defeated in the general election – demands still greater portion of the power. This is a very explicit sign of the hour where our nation stands and all the greater is the responsibility to say a decisive word.

Let us compare it. The entire life of Bishop Adalbert, misunderstood and refused from the beginning, was a dispute with the state power of those times, a dispute over the freedom of the Church and of man. And its result? The genocide in Libice and the exile of Adalbert – enforced, but freely accepted exile. It took a long time before we transferred his relics back to the Prague cathedral. They were collected only when the Czechs headed by a prince made a vow after a three-day-long fasting, this vow being in fact the first Czech constitution. It took many decades before the wound of Libice healed and there emerged a state-forming idea of two olives – Saint Wenceslas and Saint Adalbert – growing on one twig of the nation. This is how Saint Bishop Adalbert found his way to the Myslbek’s sculpture of Saint Wenceslas and other figures in the Wenceslas Square – a place where our modern history has been and is decided. The expatriate Saint Adalbert returns to his cathedral at the place where his chapel stood from the times of Emperor Charles IV, the Father of the Country; he returns in a form of a statue of Saint Adalbert together with Radim and Radla by Karla Vobišová-Žáková. A model of these sculptures from 1947, placed in the cathedral by Cardinal Beran, was as if exiled after the communist takeover of February 1948 together with himself. Now both our pastors return.

The life of Cardinal Beran was filled with the same struggle in the conditions corresponding to the times nine and a half centuries later. Equally educated, equally silent, equally faithful to the nation, equally firm in his faith and ready to make sacrifice for it. As a prisoner in Theresienstadt and Dachau concentration camps he saw what is a direct threat to life and how inevitable it is for all the endangered to cooperate. Their bare life was at stake and helping to each other were ideological adversaries. Here Cardinal Beran experienced ecumenism as well as the idea that it is possible to work together even with ideological opponents at power with the common aim of building the State and for the benefit of the entire society. Not a long time later he was disappointed. All the Churches swore an unconditional obedience to the State and its ideology. Only he as a head of the Catholic Church in the country and together with him other bishops refused to do so. As a reward for his reserved willingness to cooperation with the Government after the February 1948, he was lead to internment and later forced to leave the country forever. However, I am not blind to those Catholic priests who betrayed their bishops and the Pope and created the fifth column in the Church, collaborating with the red totalitarianism. Their role is testified by their applause to the decision of the Party and the Government to expel Archbishop Beran from the country, thus preventing him from the exercise of his office. This decision was cancelled by the Government of the Czech Republic together with the President as late as in autumn 2017. It is not a coincidence that the same fate affected the primates of the Central European countries where Saint Adalbert left a visible trace.

I have mentioned that we again are in the decisive hour. Cardinal Beran didn’t remain silent, nor can I remain silent. What threatens us? As in the times of Saint Adalbert and of Cardinal Beran, the family is attacked: unprecedented and destructive laws are designed and passed against it. Laws degrading man to asexual something are being prepared. Laws against Churches, let’s say it ecumenically, are designed with the aim to marginalize and control them. Let me remind you that Cardinal Beran spoke about it convincingly during the II Vatican Council on religious freedom and ecumenism in the spirit of humility and brotherhood. The freedom and dignity of man are being restricted and suppressed today by regulations in health care, social institutes and schools. We are threatened by powers and external ideologies, and we cannot resist. During many steps we encounter bureaucratic bullying. The society polarizes and radicalizes. Larger and larger groups shout in the squares and sometimes are ready to “put everything right”.

Do not remain silent, Archbishop! I cannot remain silent, I must warn, appeal for reason and appeal for reconciliation and for the service to the neighbors! In the first place I must, as did my predecessors Saint Adalbert and Cardinals Beran and Tomášek, declare again: “The Church is on the side of the nation!”, that is the side of all the citizens of the Czech Republic who live here, work for the development of the country and protect her. I firmly believe that those words are the words of the Jesus’ Golden Rule. Let me close by quoting the last sentences from the testimony of Cardinal Beran: “Although my heart falls to dust in cold foreign country, my love for the homeland would never perish, I would never stop praying for my nation.”