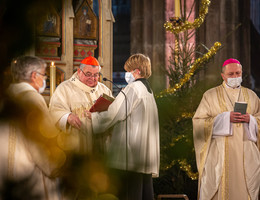 In the time of pandemic crisis, the Christmas celebrations of 2020 in the Czech Republic took place more modestly than in previous years.

Due to the emergency measures caused by the pandemic, the Christmas celebrations in the Czech Republic took place more modestly than in previous years. Nevertheless, they had strong spiritual dimension. Families gather for a Christmas celebration after sunset on Christmas Eve. In that time, there is a festive dinner consisting of fish soup, fish, and other courses. Then the Christmas tree is lit, under which gifts are prepared for children and adults. Many inhabitants of the Czech Republic who do not attend church normally come to church during Christmas, which is made possible by the fact that according to the Czech law the public holidays take three days from 24th to 26th December.

This Christmas, the Czech government placed the whole country into tier 5 lockdown due to increasing spread of infection and banned going out from 9 pm to 5 am. Nevertheless, an exception was made on 24th December as many people attend the Christmas Eve Midnight Mass. The exception was valid for journeys to services of all churches and back from 24th December 11 pm to 25th December 1.59 am. As a precaution, however, in many places the “Midnight” Mass was celebrated late in the afternoon, after sunset. In the Cathedral of Saints Vitus, Wenceslas and Adalbert in Prague, the Archbishop of Prague, and the Primate of Bohemia, Dominik Cardinal Duka, celebrated Holy Mass only in the presence of 300 believers. They had to book seats in advance. The service was broadcast by the private TV channel Prima. The cathedral is located in premises of the Prague Castle, the seat of the President of the Republic, which is otherwise closed to the public due to the pandemic. The Office of the President of the Republic set an exception for worshipers from 24th to 26th December.

In accordance with a governmental statutory instrument of 23rd December 2020, churches in the Czech Republic have limited the number of those who can attend services from 24th to 26th December to 20% of seats and from 27th December 2020 to 10th January 2021 only to 10% of seats. Some Catholic bishops banned the Midnight Mass at all in their dioceses due to the pandemic. In Stříbro in western Bohemia, where the new local group of the Church Law Society is located, parish priest emeritus Archdean Jiří Hájek celebrated the Mass on 24th December at 4 pm. The church was open for prayer from 9 pm. Musical accompaniment was provided by the local Elementary Art School under the leadership of its director Bc. František Kratochvíl, a member of the parish council and chairman of the local group of the Church Law Society in Stříbro. A pupil of the school, twelve-year-old Ondřej Tolar (see photo), played trumpet with piano accompaniment by Mgr. Hana Bezděková, sang the Christmas carol Silent Night (Stille Nacht) and the Czech Christmas hymn The Lord Christ Was Born. Anna Pospíšilová, a former pupil of the Stříbro and Plzeň Elementary Art Schools, played the compositions of old masters on the organ. The event was organized by the parish priest Miroslav Martiš and members of the parish council. The church was open until 10.30 pm so that people could get home in time.

Traditional New Year’s Eve services were also celebrated this year, although there was no exception to night curfew. The Archbishop of Prague, Cardinal Duka, celebrated Holy Mass on New Year’s Eve at an important pilgrimage site in Stará Boleslav, where national pilgrimages to the patron saint of the Czech lands St. Wenceslas take place every September.2 Holy Mass was celebrated in the local Basilica of the Virgin Mary without the presence of the faithful and was transmitted online.

In all churches, transmission online and on TV is becoming an important means of spreading God’s word. Many Catholic parishes and evangelical local congregations organize broadcasts of services at Christmas and other liturgical periods. Daily services are broadcast by Catholic TV channel Noe based in Ostrava (northern Moravia) and the Christian radio station Proglas with its main studio in Brno (southern Moravia), which has regional studios in all Bohemian and Moravian dioceses. The public television broadcaster Czech Television broadcasts religious services of all main denominations regularly. Services are often broadcast by some non-church private television stations.