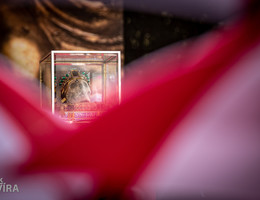 Tthe celebrations of the main patron of the Czech lands, St. Wenceslas, took place in Stará Boleslav 28th of September, with the mass served by Cardinal Duka.

The national pilgrimage to St. Wenceslas in Stará Boleslav (Altbunzlau) near Prague, where Prince Wenceslas was murdered in the doorway of the Church of Saints Cosmas and Damian on 28th September 935 (older data state 929), was the major part of the celebrations. In Stará Boleslav, there is also a Marian painting of the Palladium of the Czech lands, venerated in the local Church of the Assumption of the Virgin Mary. The celebrations took place to a limited extent for hygienic reasons this year. The pilgrimage Mass began on Mariánské náměstí on 28th September at 10:00 am. Dominik Cardinal Duka OP, Archbishop of Prague and Primate of Bohemia, celebrated the Mass. The
sermon was delivered by Archbishop Jan Graubner, Metropolitan of Moravia and chairman of the Czech Bishops’ Conference.

In his homily, Archbishop Graubner reminded us that Prince St. Wenceslas advocated the Christian and European orientation of our nation and showed the wisdom drawn from God’s word. The legacy of St. Wenceslas binds us, because now we take care of his country. He then mentioned the papal ecological encyclical Laudato si’, bringing the challenge into a broader context. The main celebrant Cardinal Duka asked present diplomats and their governments to work for the restoration of peace in Nagorno-Karabakh. He also thanked all the pilgrims, but also police officers, doctors, and medical staff for their extraordinary efforts at this time. On the same morning, Michael Cardinal Czerny, S. J., Canadian Jesuit born in 1946 in
Brno (Moravia) celebrated the Holy Mass in honour of St. Wenceslas in Rome in the Basilica of St. Peter. The concelebrants were priests from the Czech residence hall Nepomucenum in Rome.