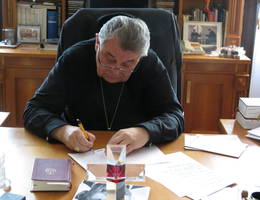 Dear Brother in the Episcopal Service, Father Archbishop and President of the Slovak Episcopal Conference,

I am happy to send you greetings from Prague and, at the same time, express my personal support for both you and your common position of the bishops of Slovakia on the situation of services during the coronavirus, especially during the Easter holidays, which are the most important holiday for Christians during the year.

I see with true hope that around the world we can observe a certain uprising of the global episcopate in the defence of the fundamental human rights, which, in accordance with the attitude of Pope Francis, includes religious freedom, and in that, the freedom of cult. In the common state of the Czechs and Slovaks (ČSSR), we were able to know to the core what it means to be persecuted, not liberated and suppressed from the freedom of cult, as well as having restricted the activities of the church in general in public spaces.

Undoubtedly, not only you, the bishops of Slovakia, but also your priests have shown your willingness to fully cooperate with the current leadership of the Slovak Republic, not only while respecting the necessary epidemic measures, but also in helping society as a whole. I appreciate your initiative very much, when the priests of your dioceses – and the first message came from the Archdiocese of Košice – that dozens of priests have joined in to provide auxiliary medical service in hospitals for patients with Covid-19. I remember our meetings together and our common path towards freedom. I respect also the Slovak Catholicism, which has so many times been able to show good service to both its nation and our continent in the struggle for freedom, which is indivisible. I also remember the well-known candle manifestations in Bratislava and the large number of pilgrimage festivities that took place in Slovakia before 1989. In the political timelessness at that time, they were, also, an encouragement for us in the Czech Republic. Undoubtedly, it must be said that the famous Velehrad pilgrimage in 1985 would not have the necessary strength that it demonstrated without the participation of pilgrims from Slovakia. To this day, my greatest greeting goes to the believers, women of Orava, whose precious voice became a decisive and remarkable protest.

I remain connected with you all in prayers, especially in support, so that the Slovak Church can fulfil its glorious mission. Worship services at this time are an encouragement to the population and also a vaccine against stress and fear. They give meaning to the human life and to the struggles for the same dignified human life.

Yours in Christ,
+Dominic Cardinal Duka