Requiem for the victims of the Katyn air disaster 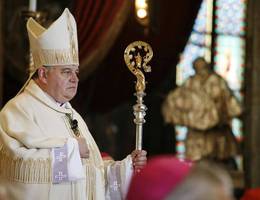 Sermon of Prague Archbishop Duka perorated during the requiem Mass for the victims of the Katyn air disaster on April 16, 2010 at the St. Vitus Cathedral in Prague.

The first passage of the Bible puts Job, the sufferer from the Old Testament, before our eyes. Author of this Old Testament's book heaped on him perhaps every conceivable tragedy, and brought him to the state of complete helplessness and then, on this archetype of the suffering, has shown what such a man does.

All that has happened. A tragedy took place, the dead will remain dead, their plans will remain just plans, their expectations are blown away, their feelings, desires, happiness lie in ruins. And not just depressed bereaved and the entire Polish nation, but also Russia and Europe and ultimately the entire human community is shocked by what happened, and wonders. Of course, as people we ask who is at fault? We find that 'no-one'. When we ask about the causation, the answer is 'it was foggy'. Only God can create that. At this point we will inevitably ask the same questions as Job, who called God to responsibility; yes, even accusing him. In our case of the dispute between the suffering man and God, we will not stay at last Saturday. We will once more remind God of Katyn, where He did not intervene and let the elite of the Polish nation to be destroyed; the men who put on the uniform of the Polish Army in the interests of defending their nation. It was an act of genocide of the soul. We will put Katyn alongside Elie Wiesel's Auschwitz and Solzhenitsyn's Gulag, pricking God's consciousness with all the misery of the world. But God is silent and does not defend himself.

That is because God has expressed himself long time ago and many times over. Strongest of all when He brought His Son into our world, just to bring us out of our endless and seemingly insoluble chain of guilt, injustice, violence, revenge and new violence. So goes the history and we all kind-of-think that it is natural, that it cannot be otherwise. We crucified Him, and He did not avenge. From all the crosses of the world He tells us that forgiveness is possible, from all the crosses of the world He says: 'what you did to me, is inhumane - I do not want any such thing ever to happen again'. In one of the recent newspapers I saw a photo from the Krakow's suburb, with Christ dragging a cross and Polish flag draped over the cross. It added to His burden.

I am a believer. Every really believing man must also be reasonable. I do not blame God, that this accident occurred, but I am asking: 'What does it mean? God, what are you trying to tell us? What is it that we could not understand for so long that you had to raise Your voice so powerfully? What is it all about?' It is all about Katyn, which the late Polish President Lech Kaczynski has called a painful wound in Polish history; it is all about Auschwitz and other painful wounds on the ground of the Polish state. It is all about other similarly painful wounds in many other countries of Europe. Katyn is such a wound on the Russian territory. And it is also about the mist that undermined the possibility of a meeting at which a clearing of such cloud of history was planned.

Dear heart-broken, I will not offer you religious consolation as an opium to relieve the pain; faith is not the opium of the people. But I will share with you one hard-earned answer to the question of the meaning of something as senseless as the sudden death of so many innocent people. The answer has the form of the challenge: Let the past, but also the present and future, be lighted by the ray of truth. Let us stop disguising and evading; it is deadly. The truth we will find, no matter how uncomfortable, we can then lift up as our cross. The truth of history, the truth about human is still too heavy; we can bear it only jointly.

Not to accept the cross of Christ as the prohibition of torment is the same as nailing the Christ to the cross yet and yet again. Not to offer a hand to reconciliation and cooperation means to slip the death of Lech Kaczynski among some meaningless coincidences. Let us remember that the purpose of his life on earth, the purpose of life of the Polish officers slain in Katyn and Jews at Treblinka, is now in our hands. Let us remember also that our sense of honour and the purpose of our lives before God's judgment depends on their testimony.