Adress to the Military Chaplains of NATO 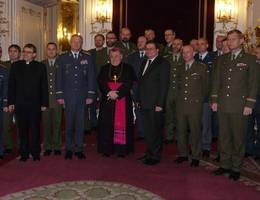 Adress of Archbishop Dominik Duka to the Military Chaplains of NATO Conference on January 31, 2011 at St. John of Nepomuk Church in Prague.

Dear Minister of Defense and Armed Forces Alexandr Vondra, dear Chief of the General Staff of the Czech Army: Lieutenant General Vlastimil Picek, Your Excellencies, dear President of Ecumenical Council of Churches in the Czech Republic Joel Ruml, distinguished guests, dear chief military chapelain Colonel Jan Kozler, dear friends of Jewish and Muslim faith, dear military chaplains, dear brothers in the spiritual ministry, ladies and gentlemen. You are very welcome in our city of Prague in the proximity of the Saint Vitus´s cathedral. I am quite sure for many of you this is not your first visit of Prague. I mention the name of this ancient cathedral deliberately as it is the symbol of the still undivided Church.

You also carry out your ministry in the spirit of ecumenism which tries to bring back the unity of Church we need. Generally speaking the ecumenism is at its best in the military forces. The reason may be that unity requires inner and outer discipline. Your service is extremely important as the importance of the army as such does not decrease but on the contrary. Let me remind you several ideas:

many people believe that a soldier is destined to killing or to be killed. The story of  John the Baptist in the Gospel shows us that Christianity from its beginnings was strongly present among the Roman soldiers and it never underestimated the work of a soldier. Armies always  represented the states and they were created by the civilization effort. The more developped civilization the more necessary its defence was. The Roman Christian soldiers, played a key role in the recognition of the religious freedom by the emperor Constantine the Great in three hundred thirteen AD.

The soldier does not fulfill his role only in the direct fight but his main task is to frighten the enemy away from the attack. This used to be the sense of the military service in the past and it is the very same in today´s military missions. Health care, the construction of roads, houses and other networks. This is what the soldiers have used to do always. The Roman Christian soldiers were not only warriors but also husbands and fathers of their families. The danger and hard conditions of their life strengthened the importance of the family and were bringing the questions about the sense of life and death.  Are not there similar situations in your missions, in your units even today?

Please, I am asking you: be support to our soldiers and prepare them for the complexe development of military service as it is an important and urgent task even today at the time of both inner and outer danger. In the time when many of you lack the full recognition and appreciation from the side of the politicians and the weak state institutions are threatened by anarchy and partial interests. Also here has always the army played an important role. This is embodied in the constitutions of the states you represent here.

Let me wish you a pleasant, interesting and may I say beautiful stay in Prague. The city is inviting you to explore its beauty, it has been work of great army leaders,  but also artists who have expressed  their gratitude to those who defended and liberated it. The city of Prague invites you to enjoy it!

Thank you for your attention.