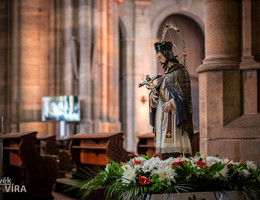 Several hundred people attended the Navalis celebrations held in Prague on Saturday to commemorate 300 years since the beatification of St John of Nepomuk, the patron saint of boatmen and bridges.

The celebrations started with a solemn mass in the Cathedral of St. Vitus followed by a procession across Charles Bridge to Křižovnické Square. The traditional water celebrations with gondolas on the Vltava River did not take place this year due to the coronavirus pandemic.

Celebrations also took place in the town of Nepomuk which unveiled an "old-new" life-size, cast iron statue of St. John of Nepomuk which was discovered in 2019 during a dig in the grounds of the psychiatric hospital in Lnáře. The site belonged to a monastery until 1950 and it is believed that the statue was hidden by Augustinian monks to prevent its destruction.

The main event in Nepomuk will be Sunday‘s pilgrimage mass in the church of St. John of Nepomuk celebrated by Archbishop Dominik Duka.