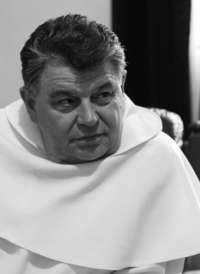 Dominik Duka OP was born on 26 April 1943 in Hradec Králové to a family of an army officer who took part in the anti-Nazi resistance abroad. His father left for Italy in 1944 and later through Switzerland to England, where he fought in the Czechoslovakian army; in the 1950's he was imprisoned together with other officers from the Western Front.

In 1960, Duka finished Tyl Grammar School in Hradec Králové but he could not continue his studies and therefore he worked in the factory for three years and was taught to be a locksmith. In 1962-1964 he did his compulsory military service. Only after much protraction, was he admitted to enter the Ss Cyril and Methodius' Faculty of Theology in Litoměřice in 1965. On 5 January 1968 he entered the secret novitiate of the Dominican order with the religious name Dominik and on 6 January 1969 he took his temporary vows. He was ordained as a priest on 22 June 1970 by Cardinal Štěpán Trochta, bishop of Litoměřice. For five years he worked in the boundary parishes of the Archdiocese of Prague (Chlum svaté Máří, Jáchymov, Nové Mitrovice – all of them are part of the Diocese of Plzeň today). On 7 January 1972 he took his solemn vows in the Dominican order.

In 1975, his "State Approval of the Priestly Service" was rescinded and he worked in Škoda Plzeň for fifteen years; at the same time he lived the illegal religious life and studied. In 1975-1986 he was a vicar of the Dominican provincial and from 1976 to 1981 a master of the clergy. He participated in the establishment of the order's secret study centre and organized religious activities for youths in the entire Czechoslovakia. In 1979 he graduated with a Licentiate of Theology at the Pontifical Theological Faculty of St John the Baptist in Warsaw, Poland.

For his activity in the Dominican order and the secret publishing of books (so-called "samizdat"), he was arrested in 1981-1982 and imprisoned in Plzeň-Bory. From 1986 to 1998 he was a provincial of the Czechoslovakian Dominican Province, in 1992-1996 president of the Conference of Major Superiors of Men Religious in the Czech Republic and vice-president of the European Conference of Major Superiors of Men Religious, in 1990-1998 a member of the Accreditation Commission at the Czech Government, in 1990-1999 lecturer of Biblical Sciences at the Ss Cyril and Methodius' Faculty of Theology of Palacký University in Olomouc.

On 6 June 1998, he was appointed bishop of Hradec Kralove by Pope John Paul II and on 26 September 1998 he was ordained by Archbishop Karel Otčenášek and co-consecrators Cardinal Miloslav Vlk and Archbishop Giovanni Coppa, Apostolic Nuncio, at the cathedral of the Holy Spirit in Hradec Králové.

He took up generous activities and projects from his predecessor Karel Otčenášek. He proposed St Adalbert to be the third patron saint of the diocese. He founded the diocesan theological institute and a church grammar school in Skuteč. In 2002 he summoned the Second Diocesan Eucharistic Congress. Reconstruction of the "Nové Adalbertinum" was finished under his service and in the area's salla terrena a new Episcopal Library was built. The historical library in the residence was reconstructed. On 10 November 2004 Bishop Duka appointed new canons of the Holy Spirit Cathedral Chapter in Hradec Králové. Pope John Paul II appointed him apostolic administrator of the Diocese of Litoměřice on 6 November 2004 and he carried out this service until 22 Nov 2008. In 2007-2008 he organized the 700th anniversary of the Holy Spirit Cathedral, preceded by a reconstruction of stain glass windows and the interior, including a liturgical adjustment. In 2008 and 2009 he initiated the "Week of Mutual Understanding", a pastoral activity among inhabitants of large cities regardless of their confession. As of 1 July 2009 he founded the Diocesan Ecclesiastical Court. Bishop Duka had been administering the Diocese of Hradec Králové for twelve years, he designed and fulfilled the "Seven-Year Pastoral Program" to prepare pastoral service for a new millennium.

In 2000-2004, he was vice-president of the Czech Bishops' Conference. On 13 February 2010 he was appointed 36th Archbishop of Prague by Pope Benedict XVI. In April of the same year the czech bishops elected him president of the Czech Bishops' Conference. During the Consistory of February 18, 2012, was Archbishop Duka elevated to the Sacred College of Cardinals by Pope Benedict XVI.

Among the large number of his books, there are: Zápas o člověka ("Struggle for a Man"), Úvod do studia Písma svatého ("Introduction to the Biblical Studies"), Škola vnitřní modlitby ("School of Interior Prayer"), Úvod do teologie ("Introduction to the Theology"). His participation and 30-year-long organization of the translation of the Jerusalem Bible to Czech, published in 2009, is of great significance. During the Communist regime he secretly published studies in the "samizdat", articles in Sursum. He now publishes in Salve – revue for theology, culture and spiritual life, in Monitor, he is also an author of tens of articles in Czech as well as foreign books and magazines and in newspapers.