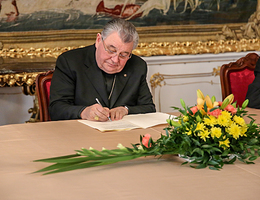 Let me take this opportunity to express my deepest condolences to the people of the United Kingdom of Great Britain and Northern Ireland, the Commonwealth, the Christian Brothers and Sisters of the Church of England, as well as the Royal Family and Her Majesty Queen Elizabeth II, wife of the deceased His Royal Highness, Prince Philip II, Duke of Edinburgh.

In the passing of Prince Philip, Great Britain loses one of the most prominent and powerful symbols of the royal court tradition, the exemplary husband of Her Royal Highness Elizabeth II, a true patriot who humbly accepted the role assigned to him. He was able to express perfectly his relationship with his homeland through very real deeds, as when he took part in the fighting during World War II. He loved his country above all and was willing to give for it the most precious thing he had himself: his own life.

I wish to assure all the people of His Royal Highness Prince Philip of my spiritual closeness, as well as of the Czech nation's continued gratitude for the repeated help our modern state received from the rulers of the Crown of St. Edward after 1918. I am thinking not only about the support for the constitution of an independent Czechoslovakia after 1918, the admission of Czech soldiers to the British Armed Forces during World War II, the important contribution to the defeat of totalitarian communist regimes after 1989, as well as assistance in the full reintegration of Czech lands into the structures of Western Europe, symbolized, among other things, by the official and truly important visit of the royal couple to the Czech cities of Prague and Brno in the year of 1996. For all this – and much more – our deepest thankfulness goes to His Royal Highness.

With true sadness in my heart, God Bless the Queen,
Dominik Cardinal Duka.